Still never got the hearts.. My couple topped up. Her  IGN is MsxLiz
2

Well most of the issues are caused by T3 Entertainment itself and the publishers need to report it back to the developers. You need to know that Audition Korea is the most priority server..after that the other servers are coming in a order and you can guess that Redbana is the last server even if its a daughter company of T3 Entertainment. Could be fault due to the lack of playerbase. But you could discuss it all day and nothing will change. But you shouldnt never blame the Game Masters. They are just getting hired through a job page and are lately humans like you and me. They cant do so much expect to report the bugs to the developers. About the Songs you can discuss it out too since other Audition Servers are just stealing the Songs from youtube but since Redbana is hosted in America its almost impossible to do that.

I actually think that you're wrong. Redbana posesses another type of contract, which lets them change clothing prices at their will. It means that they have full access to the game without having to report anything back to T3 Entertainment. My suspicion is that they just dont do their work at Redbana. Besides getting Licenses for Songs, copying the Clothes from Korean they dont really do anything. There are so many exploits, bugs, glitches and community issues, yet instead of fixing them, they hire GM's (if they're even there) for silly events.

GM's cant actually do much. All they do is host the events and report back to the developers over at T3. Redbana themselves dont have any way to alter the files really or add in content themselves thats why T3 has to do it.
GM's just get told what they do and they follow it. Idea pitching isnt really possible cause its what T3 wants not the GM's.
We have NUMEROUS bugs still in the game with songs being off beat, Broken Auto-Generated Beat Up Charts, Songs that start too early, Guitar mode scores not working and many other game breaking bugs they dont want to fix.
The only BIG thing i saw them change before was making the Couple garden/User info server sided and i applaud the developers on that, But the GM's cant do ANYTHING besides report back to T3 and just go from there. Its up to T3 if they want to take action.
8

@Tianha
Someone needs to make the first step, lego!

I asked support about this mark back in 2016 and they said the mark is not available in the game. Nor did they know if or when they will implement this mark to the game.  It is a beautiful mark though. As of March 20th, 2019 (when I opened the marks window), the Guardian Angel Mark and placeholder spot has been removed. So I'm guessing it won't be coming any time soon or it will be linked with some sort of event or purchase. 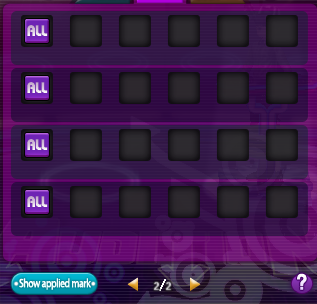 Technical Support / Re: Oy, Your Game is Broken Rn


Both parties are NOT at fault. The Devs are when they cant even fix the game.
14

Technical Support / Re: Oy, Your Game is Broken Rn