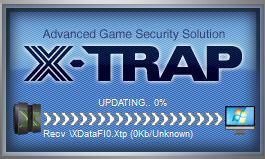 I've tried downloaded it from Redbana and from Steam, both come up with this same error. I've disabled Windows Defender and my firewall and restarted the game many times over.

Edit: I've re-installed several times as well. and everytime, I get this after it hits 145/145 in the patcher:

Running the patcher again after will re-download the patch update again and it launches into x-trap just fine. But I still get those x-trap errors as stated above.

Maybe someone can send me a copy of their xtrap folder?
Pages: [1]